July 10, 2011
In the previous post I compared electricity production and imports in California and Texas. I told you that renewables generate about the same fraction of electricity in both states. Texas produces all of its electricity, while California imports coal and gas - as electricity and for electricity generation - almost five days a week.

It is important for you to understand that California will need to import a lot of carbon as natural gas to continue "decarbonizing" its economy by, for example, switching to plug-in vehicles. Without all that extra carbon, California's economy will undergo a miracle slimming diet. Such are the laws of physics.

What I didn't tell you in the previous post is that roughly half of all natural gas in California is used to generate electricity. The residential sector uses 22 percent of the other half. Of that amount, 88 percent is used by space and water heating.  So, if there are problems with imports of natural gas to California, not only there will be blackouts, but also a lot of unrefrigerated raw food will have to be consumed in the cold houses.

Since 1970, the number of households in California has almost doubled from 6.5 million to 12.5 million, pushing total residential natural gas consumption from about 5.5 billion therms in 1970 to about 6.7 billion therms in 2007. However, thanks to the significant improvements of efficiency, the average annual gas consumption per household has dropped more than 36 percent, from 845 therms to 538 therms.


One therm equals 100,000 Btu or about 100 cubic feet of natural gas, or about 30 kilowatt hours (kWh) of heat. An average household in California uses therefore 1,300 kWh of natural gas heat per month; quite a lot.

What I also didn't tell you is that water is a significant source of embedded energy consumption in California.  In 2005, the total water-related energy use in the state was 48,000 GWh of electricity, and 4.2 billion therms of natural gas, i.e., 60% of the total residential use of natural gas. Pumping water to LA required, respectively, 19% of all electricity used in the state, and 32% of non-generational natural gas use. So, I guess, there may also be 15 million thirsty unwashed people in Southern California without the plentiful supply of natural gas.

But I digressed.  Let's talk about the use of liquid transportation fuels in California and Texas. 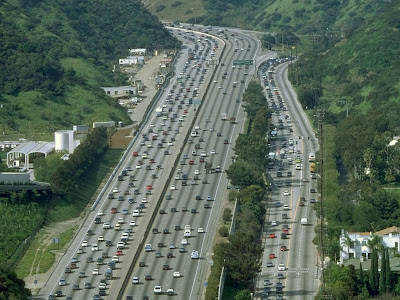 Click on the image above to see it in full size.
Californians drive a lot. They also use their special blends of gasoline that need to be produced in California. Californians are so dependent on their cars that a closing of a single freeway in L.A. for 53 hours has been termed a "carmageddon." 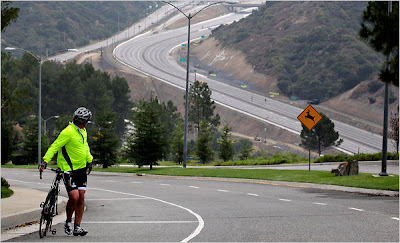 Click on the image above to see it in full size.
Hwy 405 sans traffic and people. This is how a completely decarbonized L.A. will look like. There is nothing wrong with this vision of the future, as long as the many fewer people who will live in the decarbonized L.A. will have water to drink and food to eat.  Image source: Associated Press.

Even during the current deep recession, California needs a steady supply of crude oil at a rate of 600,000 barrels per day, 7-days a week, 24 hours a day. Since California produces its own special brands of gasoline, imports of finished petroleum products are minimal. According to the California Energy Commission, in 2009, California produced enough crude oil to power its transportation each Monday through Wednesday 7:12 p.m. The rest of each Wednesday, and on Thursday, Friday, Saturday and Sunday, Californians drive on imported crude oil.

The crude oil imports to California are dominated by Saudi Arabia, Ecuador and Iraq, with Mexico being a distant fourth supplier. In 2005, these main three oil suppliers delivered 71% of crude oil imports in California. Another important development has been the appearance of Angola, Brazil and Canada as the increasingly significant suppliers since 2005. California's oil sources are also the main suppliers of heavy, sour crudes to the Pacific Basin. For this reason, California competes directly with other Pacific Rim consumers, who have the ability to process these heavier crudes. In light of the growing oil consumption in China and China's political clout, California may not be able to compete well in a constrained oil-supply market.

Incidentally, the oil supply situation is quite different in Texas, the second most populous state in the U.S. on its way to eclipse California as the main economic driver of the U.S. economy. This will inevitably happen, unless the Republican extremists destroy Texas' growing public education and what's left of the already meager government services here. In fairness to Texas, however, California has already conducted a summary execution of her public education system, once an envy of the entire world. It is safe to say that California will never recover from this ugly execution and we in Texas should welcome as many of the dazed survivors as we can.

But I have digressed again. As of this writing, Texas produces essentially as much oil as it consumes,  1/4 of U.S. natural gas, and its refineries produce about 25% of U.S. supply of gasoline and other petroleum products.   Texas produces four times more energy as natural gas than as crude oil.  For the benefit of Mr. Urbina and others, Texas has plenty, plenty of natural gas for export to New York and Pennsylvania. 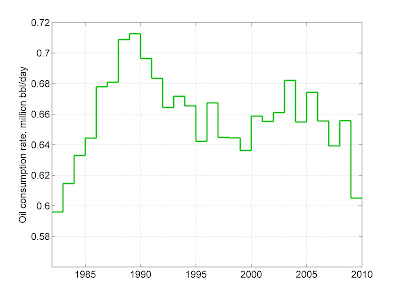 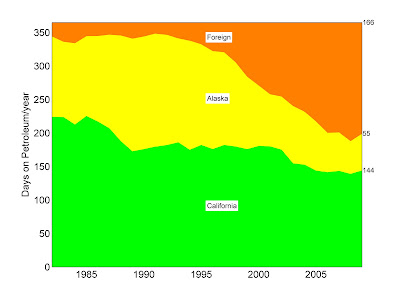 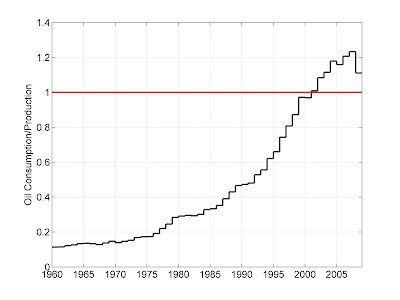 The ratio of oil equivalents consumed in Texas as finished petroleum products to the oil produced in Texas. This ratio was 1:7 in 1960 (Texas produced seven times more oil than it used), and it is just 1.1:1 today.  A small road tax on Hummers, Chevy Tahoes,  and so on, should bring this ratio to balance almost overnight.  Sources: Texas Railroad Commission, DOE EIA, accessed 10/25/2010. 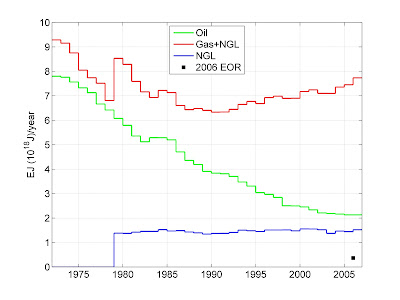 
P.S. I thank the anonymous reader for the comment and I stand corrected. Here is the full list of foreign crude oil suppliers to California in 2010.  It is interesting that since 2007, Mexico has virtually stopped exporting oil because of the fast-declining production there. Angola was displaced by Russia and Colombia. Colombia is reaping benefits from a relative peace and a rational crude oil production policy, while the irrational Venezuela keeps on sinking.

By the way, if you go to the California Energy Commission's website, it will take you some time to find the crude oil statistics. While searching for the shameful transportation fuels, you may treat yourself to reading up on many other more important subjects, such as the Bionenergy Action Plan. Reality check, anyone?