July 07, 2011
Using the approach introduced in the previous post, I will now investigate how electricity is produced and imported in Texas and California.  I choose these two states because I have strong ties to both of them, and they also enjoy very different public images.  Texas is generally viewed as pro-oil, gas, coal and nuclear power, while Californians appear to oppose all of these sources of electricity in their outlets, while touting the green and renewable sources.  It is therefore instructive to look at the main sources of your electricity when you live in Texas or California.

For the record, last year, Texas produced twice the amount of electricity imported and produced in California. Most of the difference was caused by air-conditioning everything in Texas, but also by Texas' large base of heavy industry, which is already gone from California, perhaps forever.

I start with my home state,Texas, because it is very simple to describe its electricity sources.  Basically, Texas has its own electrical grid, independent of the rest of the U.S. The Electric Reliability Council of Texas or ERCOT operates the electric grid and manages the deregulated market for 75 percent of the state.  This grid is powered almost always by the energy sources and power plants within Texas' national borders.  Texas imports cheap, low-sulfur coal from Wyoming, just like everybody else (two counties in Wyoming produce almost 1/2 of U.S. coal).  But Texas could quickly switch to its own, much lower quality coal, or tap into its own huge production of natural gas.   In 2009, Texas produced 152 days of its electricity from coal, 145 days of electricity from natural gas, 45 days of electricity from nuclear reactors and 1 day from hydro turbines. 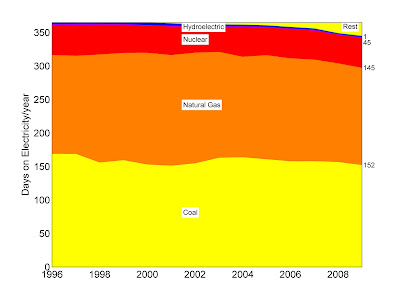 Click on the image above to see it in full-size.
Over the last 15 years, the base load electricity in Texas has been stably divided among coal, natural gas, and nuclear power sources.  Coal and natural gas had almost equal shares, together delivering almost 300 days of electricity per year in 2010.  Also in 2010, nuclear power delivered about 45 days, and hydropower a short one day of electricity in Texas.  I remind you that Texas is a very dry state with just a couple of big dams. 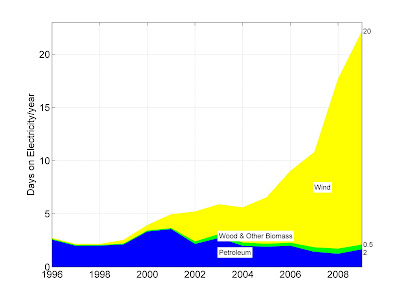 The situation is not nearly as simple in California.  First of all, California has been "decarbonizing" its economy by ceasing local electricity production from coal, and instead buying mostly coal-generated electricity from the surrounding states.  Second, California produces only 13% of the natural gas it consumes, so most - if not all - gas used to produce electricity there comes through pipelines from elsewhere in the western U.S. and western Canada.  California is at the end of those pipelines, forcing it to compete with other states for supplies. 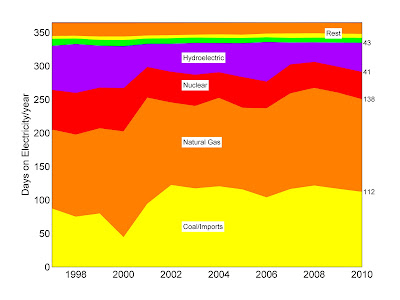 Click on the image above to see it in full size.
In 2010, the base load electricity in California was generated from coal (112 days), natural gas (138 days), nuclear reactors (41 days), and hydro turbines (43) days.  Coal was imported as mostly electricity, and almost all natural gas was imported as fuel. Therefore, one way or another, California imports almost 5 days of the electricity it consumes each week. If this is not downright dangerous, what is?

The largest source of renewable electricity in California is geothermal steam that delivered 16 days of electricity per year in 2010. Geothermal steam is generally cheaper than photovoltaics and works most of the time. Unfortunately, the term "geothermal" does not have the same sex-appeal as "clean solar energy". 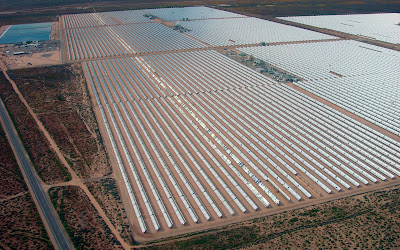 Click on the image above to see it in full size.
The giant solar power plants in the Mojave desert, like the one above, have paid off handsomely. After a multibillion dollar investment, California can now boast its own very sexy solar power for 6 hours a day over 4 consecutive sunny days in one year (but not over the intervening nights). 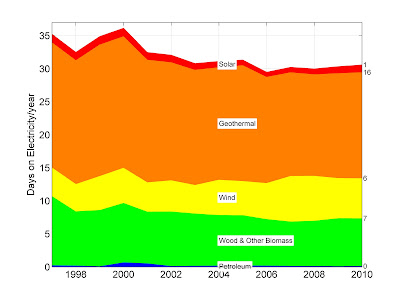 In 2010, the renewable electricity in California was split among wood and other biomass (7 days), wind (6 days), geothermal (16 days, and solar (1 day).  Note that in 2010, the "clean" California generated one month of its electricity from renewable sources, about the same fraction as the "dirty" Texas.

In summary, I hope that you see now how difficult it is to get away from the base-load electricity generated from coal, natural gas and uranium.  Incidentally, New York wants to shut down their 2000 MW Indian Point nuclear power plant.  It's a great idea, as long as they understand clearly that the environmentally-friendly coal from blowing up West Virginia will come to rescue, or they will have to use a whole lot more of natural gas from that hydrofractured shale next door, or they will have to start turning off those lights, plasma TVs, computers, air-conditioners, etc.   Otherwise, the good New Yorkers will experience some really nice brownouts or blackouts, or both.