A Letter to a Friend

I do not mention your name, for you can be anyone on the whole Earth. You could have any color of skin, and belong to any tribe and clan. You could give offerings to any Gods and believe in any myths. In modern impersonal terms, you could be of any race, nationality, religion and political creed, and be of any sex whatsoever.  It took us a million years to develop that big, complex brain of ours. Some 100,000 years ago, in the harsh, frigid climate of Europe and Asia, there were perhaps a few hundred of us left on the brink of extinction.  But we did not go extinct then and here we are, my friend and brother, all 7.8 billion of us.

Learned people say that we must have come from Africa, mostly from the Great Rift Valley:

"Our species, Homo sapiens, is highly autapomorphic (uniquely derived) among hominids in the structure of its skull and postcranial skeleton. It is also sharply distinguished from other organisms by its unique symbolic mode of cognition. The fossil and archaeological records combine to show fairly clearly that our physical and cognitive attributes both first appeared in Africa, but at different times. Essentially modern bony conformation was established in that continent by the 200–150 Ka range (a dating in good agreement with dates for the origin of H. sapiens derived from modern molecular diversity). The event concerned was apparently short-term because it is essentially unanticipated in the fossil record. In contrast, the first convincing stirrings of symbolic behavior are not currently detectable until (possibly well) after 100 Ka. The radical reorganization of gene expression that underwrote the distinctive physical appearance of H. sapiens was probably also responsible for the neural substrate that permits symbolic cognition. This exaptively acquired  [we developed a function that was not brought about by natural selection, TWP] potential lay unexploited until it was “discovered” via a cultural stimulus, plausibly the invention of language. Modern humans appear to have definitively exited Africa to populate the rest of the globe only after both their physical and cognitive peculiarities had been acquired within that continent."
Think of this, please, my white, unvaccinated Republican friend from Alabama.  You and your black brother from Oakland, California, share almost everything, and most certainly the same human brain that allows you to filter reality, and refuse to see, hear and understand what the ancient limbic and reptilian parts of your triune brain tell you not to.  For both of you, my brothers - and for me - it is difficult to really understand the words we have not grown up with, and have not been hurt by. I, in particular, am a little better off, because I am writing this essay in the the third language I learned, using words I could not possibly know as a child. But this makes little difference, because we all, I mean all, are connected in an infinite number of ways, share the same ancient memories and instincts, and deceive ourselves in similar ways.  We really do not understand the words we use to describe the happenings that impact all of us at the same time in ways that are difficult to categorize as imminent physical threats.
So how did I come to writing about how we really understand words?  Well, I  am preparing a graduate course: Earth, Environment, Energy and Economics. I have been teaching this course since my time at Berkeley.  The course has its own 533 page book I will publish one of these days, and a myriad of well-chosen and documented examples, based on rigorous science.  I like to teach this course differently each time I offer it.
While preparing the first three class lectures for this fall, I started reminiscing that I have been warning people about overpopulation, devastation of the environment, mass extinctions, pollution, climate heating, biofuels, tropical plantations, industrial agriculture, overconsumption, etc.  for the last 20 years, with the results that were always below my expectations.  Yes, the students have been telling me that this course was a life-altering experience for them, but  - I thought - how could I convey to them the sheer horror of the subjects I have been covering? Could I ever show them my real indignation and rage, the crushing pain and fear for my own children and grandson?
A little earlier, on June 25, 2021, I gave a presentation to the Polish Academy of Arts and Sciences (here, minute 7:40; the slides are in English, but I speak Polish).  Since the presentation was a short 20 minutes, I cut off from it the slide shown below. More about the Himalayan glaciers later. 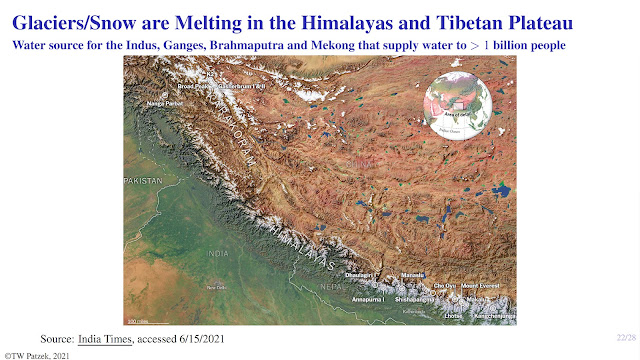 June 02, 2019
In Part I of this blog, I explained  difficulties with comprehending the astronomical scale of change that is awaiting us, the rich people in the developed countries, in our journey to a more sustainable, greener future of humankind.  I have also pointed out a few of the many ways people escape responsibility for the crimes against the Earth we  - you and I - have committed.  And, please, let's not blame the poor people in Honduras or Gabon for our sins, plastic in the oceans and greenhouse gas emissions. Exponential growth.   Remember a lonely lily pad floating on an empty pond?  She multiplied daily, so after day one, there were two lilies; after two days, four lilies; then eight; and so on.  After 20 days, there were 1,048,576 lilies. After 21 days, there were  2,097,152 lilies that covered the pond, exhausted nutrients and died.  Question:  After which day was the pond half-filled?  You already know the answer, it was day 20.  On that fateful day, 95% of the time allotted
13 comments
Read more