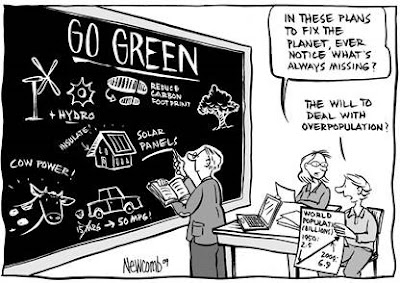 Exponential growth.  Remember a lonely lily pad floating on an empty pond?  She multiplied daily, so after day one, there were two lilies; after two days, four lilies; then eight; and so on.  After 20 days, there were 1,048,576 lilies. After 21 days, there were  2,097,152 lilies that covered the pond, exhausted nutrients and died. Question: After which day was the pond half-filled?  You already know the answer, it was day 20.  On that fateful day, 95% of the time allotted to our lilies had passed, but the lilies thought their world offered so much more space to grow! This fatal mistake in perceiving availability of resources is now common not only among most humans, but also among most economists, who are more of a space alien ilk. In Figure 1, I show you how humans will possibly undergo 20 doublings, but will massively perish attempting to double for the twenty first time. Such is the creepy logic of exponential growth.  Figure 2 illustrates intensity of the problem humanity and the world trampled by us are facing.  We add to this planet one China worth of people every 17 years.


Is there a solution to this runaway growth of human population? Likely there is none, and we will perish like any other dumb, unchecked species that overshot its ecological welcome. But, if the earthlings were sane, they could pass a voluntary UN Assembly resolution, empowering governments around the world to support financially only two or fewer children per family. Each extra child would be a cost borne by the parents, or would go for adoption by people who have less than two children. There could be fractional children, such as 1.8 legal children, with a possibility of buying credit for the missing 0.2 child from the people who do not have children or have only one child. Of course, for this voluntary population limitation to succeed, a massive global program of educating and empowering women would have to commence in parallel.  No man of whatever color of skin and religious creed should have power over a woman's body. It is fascinating that at the very moment reproductive control is needed almost everywhere in the world, the religious fanatics everywhere are doing their best to shut it down.  As usual, the right wing crazies in the US are blazing this backward trail.

As my philosopher friend, Ken Weiss, puts it: "Didn't all of the earth's creatures, on the land or in the dark, blue sea get here by grabbing whatever they could grab from whomever they could get away with it? Indeed, we're the only species ever that could comprehend future implications of present actions, so life, as a whole, hasn't had much practice with prudence. So maybe the definition of 'tragedy' should just be: how humans behave."  It appears that humans too have had little practice with prudence and foresight.

As shown in Figure 3, more humans need more power to keep themselves alive and well, especially in the resource hogging rich countries where I reside.  Today, our global civilization is an obscene, monstrous, 17.4 terawatt (TW) machine, powered mostly by fossil fuels, as Figure 4 demonstrates.  In the decade of 2000-2010, the fast-growing world added one US worth of primary power.  Today, the hunger for primary power is receding and its production seems to be peaking. Oops, I should have never used the word "peaking."  The global fossil amoeba knows only of eternal exponential growth and rejects any of the limitations the physical world requires.

OK, my environmental and sustainable friends, it is time to sound retreat from this fossil amoeba monster I just painted above. In your mind, you already have many renewable solutions that you have colored green, just like pictures in those coloring books for little children. Since your solutions are already "green," you can relax and continue living happily ever after. Or can you?  Well, therein lies the first of many, many difficulties we shall run into here and in Part III.  To begin with, each transition from one dominant source of primary power to another one took several, sometimes many decades to accomplish, as shown in Figure 5.  I know, you only want to talk about the blue part of the curve below: a transition away from the nasty fossil fuels that power the world today into something else you will enjoy. There are three key features of this transition:

Figure 6 shows that the demand for power generation increases in direct proportion to the number of humans living on the Earth.  This has been the case for the last 200 years, only the slope of both curves quadrupled since the year 1900.  You are now facing the scariest two curves in this blog.  Please take time to think about the many implications of what you see here.  I'll tell you what I think:  No transition to anything sustainable can be achieved without a drastic reduction of growth and eventual decline of human throngs that trample our planet.


Thus, the main conclusion from what you just read is this:  Stop multiplying first and decline in numbers next, because without a population decline no Green New Deal can ever happen.  I know that I am boring, but please stop focusing on the technologies of power generation, but rather on education, contraception, and a UN proclamation calling for two state-supported children and no more.  And, no, God will not provide for your five or six children today.  She has an infinity of problems with the rest of the Universe.

P.S. (06/03/2019)  I forgot to tell you that since 2008, humanity has been stuck on  the 1.27%  annual rate of population growth.  Call it a residual growth rate, after better education and enrichment here and there have been discounted by the families. This means that in 2019, 98 millions of new babies will need water, food and shelter in mostly desperately poor, failing countries.  In 2020, the number of net new babies will exceed 120 million, or the population of Egypt, see Figure 7.