Why Did You Have to Leave, Wise Ancients?

January 13, 2017
We are on the island of Sicily, near Syracuse, one of the five Corinthian colonies that also included the island of Ortygia nearby. Old people still remember that Leto gave birth on Ortygia to Artemis, the first of her twin god children with Zeus. Leto was a daughter of the Titans Coeus and Phoebe. She was an early and favorite lover of Zeus. Soon after birth, Artemis helped Leto flee Hera's wrath and escape to Delos, where the other twin, Apollo, was born. Or was it the same island, because in ancient times Ortygia was also called Delos? Who knows?

Arethusa means "the waterer." She was a gorgeous nymph, who left her home in Arcadia beneath the sea and became

A victim of the river god’s lust
She’d tried to flee; yet even hidden
By Artemis, first in a cloud then
Caverns of the sea, she learned that haven
And safe place from Alphaeus there was none
Unless as water.

And, thus, merciful Artemis turned Arethusa into a fresh water fountain on Ortygia.

This is how the Roman poet, Ovid, retold Arethusa's story much much later:

‘I (Arethusa) was one of the nymphs, that lived in Achaia,’ she said ‘none of them keener to travel the woodland, none of them keener to set out the nets. But, though I never sought fame for my beauty, though I was wiry, my name was, the beautiful. Nor did my looks, praised too often, give me delight. I blushed like a simpleton at the gifts of my body, those things that other girls used to rejoice in. I thought it was sinful to please.

‘Tired (I remember), I was returning, from the Stymphalian woods. It was hot, and my efforts had doubled the heat. I came to a river, without a ripple, hurrying on without a murmur, clear to its bed, in whose depths you could count every pebble: you would scarce think it moving. Silvery willows and poplars, fed by the waters, gave a natural shade to the sloping banks. Approaching I dipped my toes in, then as far as my knees, and not content with that I undressed, and draped my light clothes on a hanging willow, and plunged, naked, into the stream. While I gathered the water to me and splashed, gliding around in a thousand ways, and stretching out my arms to shake the water from them, I thought I heard a murmur under the surface, and, in fear, I leapt for the nearest bank of the flood.
If you want to imagine what happened next to the beautiful frightened Arethusa, read here (Bk V:572-641 Calliope sings: Arethusa’s story).

Our story of the twin gods of Ortygia or Delos does not end here. Apollo had a son, Asclepius, literally the god father of human medicine. Apollo and Asclepius, shared the noble epithet Paean ("the Healer").

This Pompeian fresco shows the wise centaur Chiron, who invented medicine, as he stood between Apollo on the left and Asclepius on the right. Chiron taught both how to be doctors and heal patients, and Asclepius carried this knowledge to the mortals.

Heart in medical healing has now been largely forgotten in exchange for technology and cool profits. As I write these words, a small gang of mostly aging, rich white men with hearts of stone is trying to kill the first comprehensive medical care program in my country.  This program attempted, however inadequately, to advance my country into an elite group of states with comprehensive medical care, such as Cuba for example.
We already know what Appolo's cousin, Nemesis, does to people who drip with hubris and usurp powers of the gods.  I am counting on her reminding these men, who really rules the world and what the price of hurting millions of people is. 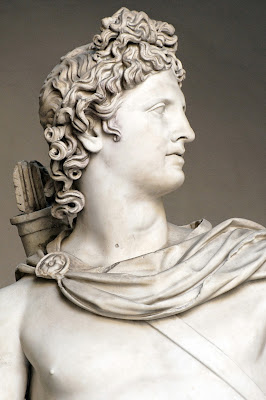 And how exactly does Mr. McConnell hope to prevail upon this youthful powerful god of medicine, arts, music, poetry, archery, sun, light and, yes, the plague?  Odysseus himself tells us how swiftly Apollo shoots his deadly arrows when he is enraged by the greedy mortals.

P.S. 03/14/2017. With the inevitability of a Greek tragedy, the Republican plan to help the rich and hurt the poor is rolling ahead.  The painful tension in ancient Greek tragedies was that viewers knew the outcome, but actors on the theater scene did not.  On November 6, I knew that this fast growing deadly cancer posing as the new U.S. administration would really, really hurt everyone, and I certainly am only a mortal. I feel so sorry towards everyone who is not a millionaire and still voted for Mr. Trump. But what's done is done, and now it is time to reap the rewards of a grand delusion that entranced millions of Americans. America now has a leader we collectively deserve, but I still weep over our national blindness. Please, Nemesis and other gods, do what you have to do, and return sound minds to these poor, poor, crazy people. When you believe lies, you are essentially crazy, because you see things that no one else can, Harry Frankfurt has taught us in his essay, "On Truth." Read it!