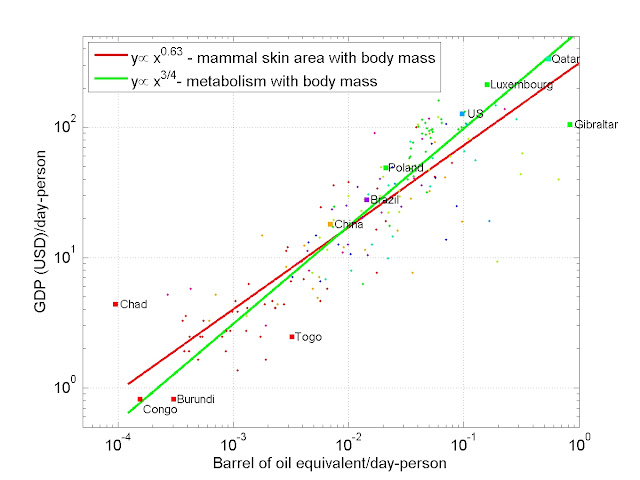 Click on the image above to see its full size.

A human society can be viewed as a macro-organism, a far-from-equilibrium creature that exists by pumping energy through it.  The more complicated the society is, the more energy per unit time it needs to pump through to keep itself going.

What you see above is a plot of the Gross Domestic Product (GDP) in US dollars per day per person, versus the total rate of hydrocarbon use in Barrels of Oil Equivalent (BOE) per day per person.  The plot is doubly logarithmic, so a straight line here is a power law curve in Cartesian coordinates. The source of data is CIA, and all 200 countries on the Earth are plotted in different colors by their continents.

The three poorest countries with the least use of hydrocarbons are Congo, Burundi, and Chad.  On the other extreme, I show Qatar, Gibraltar, Luxembourg, and US.  China and Brazil are in the middle of the cloud of points that clearly form a linear trend.

As you can see, the throughput rate of the hydrocarbon energy per person is equivalent to body mass of a mammal, and the societal metabolism (GDP/person-day) is equivalent to the rate of oxygen intake in mammals.

This finding should not be surprising. A non-equilibrium dissipative structure, such as a developed society, organizes and feeds its complex institutions with a flux of energy, much of which comes from hydrocarbons. What surprises me is that the scaling exponents are almost the same for all societies on the Earth and for all mammals.

The metabolism-like scaling of societal complexity means that "bigger" or more complex societies necessarily require more energy throughput.  Conversely, a smaller energy throughput necessarily leads to a simplification of the society.  So don't worry, the U.S. will become simpler soon, and so will our health care system, as well as funding for education and research.

A corollary to the plot above is an observation that a steady-state society, whose material economy does not grow, still requires a certain level of energy flow through it to maintain its energy-conserving structures.  More importantly, even purely spiritual institutions and organizations will require their own energy throughput to remain active. Unless everything is recycled perfectly and only heat is given off, chemical waste discharges into the environment in a steady-state economy will continue to injure the environmental services for some time.  Thus, remediation of  active chemicals will require dedicated energy throughputs for some time after their discharge, at a cost of diminishing energy allocations elsewhere. Is, then, a steady-state economy possible? Or does the second law of thermodynamics prevent its existence through a gradual creation of entropy, and an ever-increasing diversion of energy to remediate the effects of this entropy?

Next, I will plot where the USA would be on this plot if it only operated on biomass, biofuels, wind turbines, and solar photovoltaics.