In the last bog, I told you how the law of mass conservation governs the large-scale behavior of Earth's households - ecosystems - that must recycle all mass on average and export only low quality heat into the cold universe.  Now, I will give you a few useful definitions of cyclic processes, sustainability, and ecosystem productivity.

Let me start from stating the obvious:  We live in a spaceship we cannot leave, a gorgeous blue, white and green planet Earth that takes us for a spin around her star, the Sun, each year. 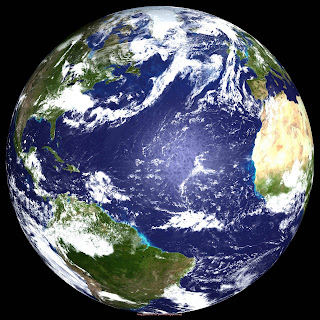 But this statement is imprecise. We really live on a vanishingly thin skin of the Earth, her ecosphere.   Think of this skin as of a thin delicate membrane, teaming with life and beauty, but incredibly fragile. We trample on this membrane and poison it.  Then we act surprised when it brakes and shrivels. 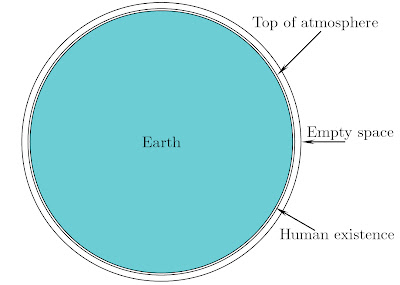 Practically all life on the Earth exists between two concentric spheres defined by the mean Earth surface at the radial distance from the Earth's center of R = 6371 km, and the top of the atmosphere at R + 100 km, or outer space at R + 400 km. Almost all of human existence occurs on the surface of the blue sphere (edge of the blue circle). As drawn here, the line thickness of this edge exaggerates the thickness of the life-giving membrane on which we live. This membrane is at most 20 km thick, from the deepest Marianas Trench in the Pacific Ocean (-11 km) to the top of Mount Everest (+9 km). Please hold an orange in your hand. When Earth is reduced to the size of this orange, her surface, on which we all live, is much smoother than the skin of your orange.

Life on the Earth is a cyclic process.  A cyclic process is anything that goes in circles and repeats itself with passage of time.  Days and nights are cyclic, so are years.  After each revolution around the Sun, our planet tries to return to the very state she was in a year earlier.  She reconciles all of her gross mass and heat balances almost perfectly.  (Remember, all mass stays on the Earth and heat is radiated into the universe.)  Therefore, on a human life scale, almost everything the Earth does is exactly cyclic.  The long-term changes in the Earth's climate, or geological epochs are much too slow for humans to observe directly. An abrupt climate change event that might last for a couple of thousands of years is a mere blink of an eye in the Earth's long history.  On the other hand, such a climate change is practically infinitely long from the point of view of humans and their institutions.

A sustainable process repeats itself without a loss of quality "forever," and leaves the environment intact "forever."

Please define your favorite "forever." Mine is about 4000 years.

By this scientific definition, modern industrial agriculture and agrofuel production that is a big part of this agriculture cannot be sustainable.  I repeat: The "renewable biofuels,"  as they are called by the cynical manipulators and the starry-eyed environmental fools, are anything but sustainable.


Several different ecosystem productivities, i.e., measures of biomass accumulation per unit area and unit time have been used in the ecological literature. Usually this biomass is expressed as grams of carbon (C) per square meter and per year, or as grams of water-free biomass (dmb) per square meter and year. The conversion factor between these two estimates is the carbon mass fraction in the fundamental building blocks of biomass, CHxOy, where x and y are real numbers, e.g., 1.6 and 0.6, that express the overall mass ratios of hydrogen and oxygen to carbon.

The following definitions are common in ecology:
If you are interested in learning more, you can read some or all of my constructive OECD paper on biofuels and photovoltaics that got me blacklisted by the Organization for Economic Cooperation and Development headquartered in Paris.

And here is the killer of all industrial biofuels of whatever generation and industrial agriculture:

For all large, mature ecosystems, net ecosystem productivity (NEP) is almost zero. In other words, one cannot continuously remove large quantities of  plant biomass from a large ecosystem, while simultaneously damaging the ecosystem services, and dumping waste.

For a short while, about a century or so, this mass removal can be accomplished by subsidizing the parent ecosystem with lots of fossil fuels and their products, but we already know that this "green revolution" is unsustainable.

There are countless examples of old thriving ecosystems that went extinct because of humans: Most of the Mediterranean coast and Lebanon were covered with ancient lush forest that was cut for fuel, charcoal, ship-building, and construction. Similarly most of Spain, parts of Portugal, Greece and Turkey, and otherwise most of Europe were completely deforested.  Most of Iraq, Syria and Egypt were devastated by the thousands of years of irrigation and agriculture, with the special emphasis on the last 150 years.  American prairie and about 1/2 of its thick rich soil were annihilated in 100 years. Much of the rich loess soil in northwest China has been flushed to the sea and gone with the wind. And so on. 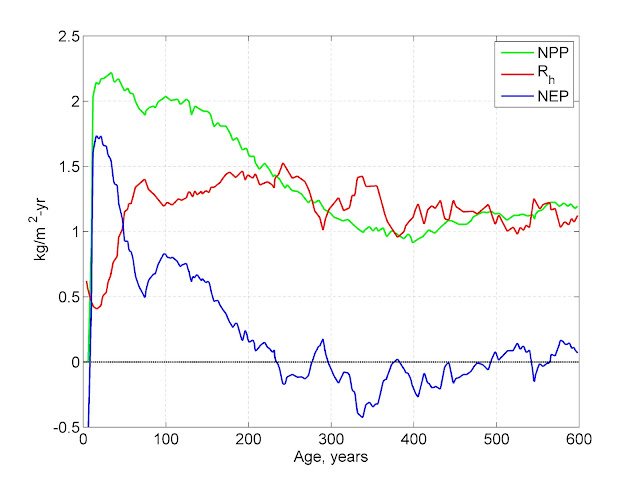 The graph above shows how the net ecosystem productivity approaches zero in a particular forest. Forest ecosystem biomass fluxes are simulated for a typical stand in the H. J. Andrews Experimental Forest. The Net Primary Productivity (NPP), the heterotrophic respiration (Rh), and the Net Ecosystem Productivity (NEP) are all strongly dependent on stand age. This particular stand builds more plant mass than heterotrophs consume for 200 years. After that, for any particular year, an old-growth stand is in steady state and its average net ecosystem productivity is zero. This graph was adapted from Songa & Woodcock, "A regional forest ecosystem carbon budget model:  Impacts of forest age structure and land use history," J. Ecological Modelling, 164, pp. 33--47, 2003.

All major tropical rainforests in Brazil, Gabon, Congo, Indonesia, and all major savannahs, like the Cerrado in Brazil or Serengeti in Africa, have been here for millennia and are at NEP = 0.  Some of these forests have been here for most of the last 10 million years! These major planetary ecosystems can be destroyed only once in human history, and our beautiful Earth will become very, very hostile to us. (Not enough forest = no rain for starters.)

The unimaginative, brutish humans are working overtime to annihilate these life-giving miracles of nature, and life on the Earth will never be the same at the time scales of human civilizations. That's thousands of years, and I could tell you dozens of gory stories about how uninhabitable for us the Earth will become. If you want to gain insight into what's in store for all of us, focus on the Middle East.

In the next installment, I will show you experimental verification of the incredibly important theoretical observation that NEP is close zero at the scale of the planet.