February 20, 2011
Given the noisy propaganda about the positive impact of renewables, or "clean energy,"  or "green energy" on global emissions of carbon dioxide, one expects there would be some.  Unfortunately, there is none as far as I can tell.  In fact, the situation is even more hopeless than I feared in my darkest dreams.

Here is the data from the International Energy Agency (IEA), plotted originally by P.F. Henshaw, and replotted a little differently by me. You can click on the plots to see them in high resolution. 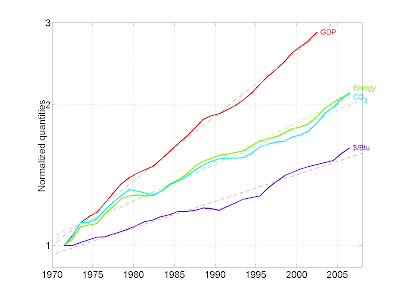 Above you see a semi-logarithmic plot of the normalized
All values are relative to those in 1971, and all curves start from 1. All trends are exponential, so they plot as approximately straight lines on the semi-logarithmic scale.  The global GDP grows roughly 1.85 times faster than global energy use and global CO2 emissions, and 3.7 times faster than global efficiency. 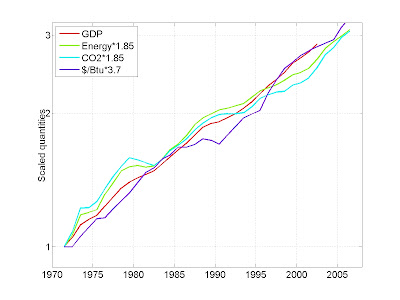 By rescaling the slopes of the trends above with the multipliers shown in the inset box, all trends more less overlay.  So here is the really bad news:
Now the good news: