January 06, 2011
Here is a decomposition into multiple Hubbert cycles of patents granted each year since 1790 by the U.S. Patent Office to 1 million US residents. Note that without a new cycle of inventions in something, the current cycles will expire by 2050.  In other words, the total number of U.S. inventions will decline dramatically in the next 20-30 years.  Some of this decline might be forced by a decline of support for R&D and fundamental research in the US. 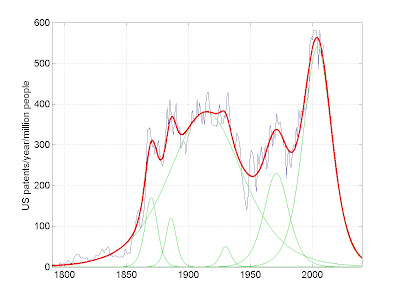 The fundamental cycle of patented inventions in the US peaked in 1914, when expressed per 1 million of people living in the US. This was the classical science and engineering patent cycle. The first small peak in 1870, was related to the Civil War and the newly acquired technological sophistication in the U.S. The second small peak in 1885, was probably related to the innovators who were born post 1860, coming of age. The third small peak in 1930, was a boost to innovation during the roaring 1920s. Curiously, the next large patent cycle, mostly in engineering, peaked in 1971, the year in which US oil production peaked too. The latest and largest patent cycle, with an apparent peak in 2004, describes mostly biotechnology, medicine, materials science, and informatics. Note that this latest patent cycle is projected to decline at a 13%/year rate. This cycle has little to do with classical geosciences and engineering applied to hydrocarbon systems. In geological sciences and engineering, we are already at a point of significantly diminishing returns, and breakthroughs will not be realized by continuing business as usual. Radically new solutions must be found in our quest for cheap abundant energy. I am not talking here about solar photovoltaics, wind or biofuels. 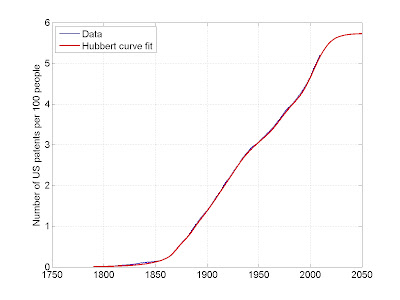 It seems that the U.S. society is slowly reaching its capacity for complexity.  Unless in near future there will be a new wave of patents, each 100 people in the U.S. will have to get by with a total of 6 patents accrued between 1790 and 2050.

November 24, 2018
Here at KAUST , we had three good rains in the last ten days. I just finished my 18 km bike ride and inhaled the vibrant shades of green of all leaves and the efervescent colors of flowers. The mangroves along the coast are growing vigorously, and today they were a bouquet of seledines reflected by the crystal clear water. It is peace where I live. Things could not be better. 11/23/2018, 11:30 a.m. Our garden after the rain.  Behind the fence, you can see the crowns of mangroves and a low tide in the Red Sea. Why then am I so worried? First this legal disclaimer: I am no Tralfamadorian .  I do not have the ability to experience reality in four dimensions; cannot access past, present, and future; and am unable to perceive any instant of time at will. Tralfamadorians are able to see the entire timeline of the universe, they know the exact time and place of the universe's annihilation caused by an unfortunate Tralfamadorian experiment, but are powerless to prevent the inevitabl
8 comments
Read more